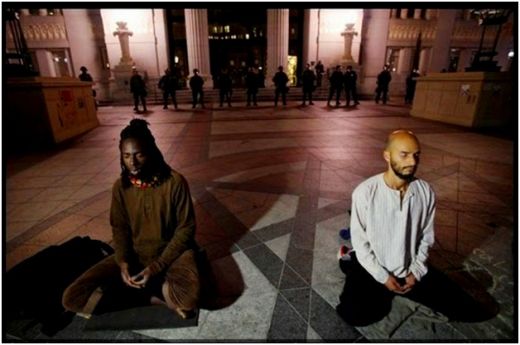 About: Pancho and more

Shining a Light ON: ServiceSpace

Gift: Anyone who reads this page and then e-mails ‘she’ at s@suzannetoro.com the word servUS will receive a 22 minute guided heart meditation with ‘she’ via skype.

“Kindness” is our weapon. Francisco heard that violence was going to be escalating at Occupy Oakland and decided that they would increase their peaceful protest with a nonviolent act of meditating. The secret ingredient during this meditation was love, compassion and kindness for the 100%, while protesting the unnecessary force that was being used against the 99%. During this inspiring ‘sit’, with the police flanked behind them as they were meditating facing the gathering at the Occupy Movement, one could not help but smile at the peace flowing from the serenity on his face. The expression stayed even as they were arrested.

As the universe would have it, Pancho and I had an interview scheduled for Tuesday, November 14, 2011, the day after the arrest. We were scheduled to speak about nonviolence and his involvement in the ‘ Occupy’ movement. When, I wrote him to request this interview, I had put a hyphen between ‘non’ and ‘violent’. He stated, that he would love to speak to me about nonviolence and then shared this….

“AHIMSA (nonviolence) is not only the absence of violence, it is not simply the negation to cause harm, but it is something infinitely more: it is when one’s heart is so full of love, so full of courage, forgiveness, generosity, kindness and compassion, that there is no room for hatred, resentment and violence. It is not a double negative but a SUPERLATIVE POSITIVE!

Nonviolence it is a call to disobey inhumane laws, treaties and institutions; it is a call to obey the law of love; it is a call to not control anger (if it arises) but to express it under discipline for maximum effects; it is a positive force; it is love in action; it is the thoughts we have, the words we use, the things we do, the cloths we wear, the food we eat… it is a way of life!

Now, when he did not arrive for the call, I connected to Pancho via my third eye and all I felt was that he was “occupied” with something in relation to the Occupy Oakland. I did not feel any sense of urgency around it, so I just let it drop. As a fellow meditator, I allow for these moments to come together in their natural flow. I trusted he would reach out to me when he was available next. During the next few days, I kept connecting to Pancho, he felt peaceful; however, I kept sensing him being held captive. I thought to myself, this must be from his previous protest because his energy was so peaceful. With this being said, I was not surprised when I saw his picture come across Facebook announcing his release.

For me personally, Pancho embodies peace, love, compassion and authenticity. He has always arrived as that. Opening his heart to comfort and inspire many. However, as the dust settles and the media frenzy swirling around the arrest of a meditator takes a calm respite, the word unification kept rolling over in my mind’s eye. I found myself seeing this as a moment for all of us to really meditate on something I did not completely understand until this situation arrived….what it truly means to be a citizen of the planet earth. For me, it suddenly removes many world issues and creates a canvas for all of us to live and create with kindness in our hearts and unification between all of our global citizens.

With that being said…I thank Pancho for yet again inspiring me to show up…Fearless with a heart overflowing with love, compassion and kindness.