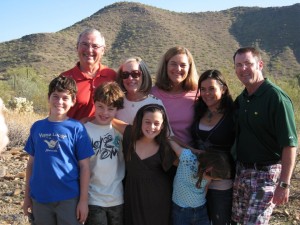 ‘She’ did not realize how deep the interconnection is with our parents until the day her brother made his big transition off this planet. It was shortly after her parents arrived to his apartment. ‘She’ was in the bedroom with his girlfriend and all the sudden it felt like a knife went through her solar plexus and ‘she’ was pulled to the floor. ‘She’ quickly yelled, “Who’s stomach is in severe pain?” ‘She’ is an empath and energy worker, ‘She’ is very sensitive to her surroundings and this felt like ‘she’ was just hit with a potentially fatal blow. After checking in with everyone, her father responded, “It is me!” He did not realize this but ‘she’ was flat on the floor. ‘She’ called back, “BREATH!” As he took some breaths into his heart, her solar plexus released. It was in that moment, ‘she’ knew that her brother’s connection to her father had been severed and her connection with her brother had also been broke. ‘She’ had experienced how powerful the energetic bond is between a child and the parent.

The solar plexus is where the father and child are tethered. It is an energy cord and no matter how far apart you are…you are connected. ‘She’ has observed this experience with others over the years and then walked through it real time during her brother’s death. Which has brought ‘she’ to a profound conclusion that we will never stop receiving an in feed from our parents until one of ‘us’ departs from planet earth. Now, this explains why parents will know when their kids are lying, sneaking around or are doing okay.

“What does this mean?” Well, ‘she’ has been known to share with many, “There are no secrets in the universe!” Everything we do is captured and can be located via a series of equations to the exact location of where the transference of energy occurred. This is very similar to how a large “mother” board works. The data is captured; however, it can never be erased (like your Facebook account). What this means is that fathers and mothers have this profound opportunity to really model and transmit their highest expression and way of being to their children. This simple awareness can dramatically shift the parents life because they will be walking through the world aligned with their highest codes of ethics and embodying this for self and their children. (YES, there are codes of conduct in the universe…we can draw the analogy of how certain configurations of energy can create an explosion…with a most certain feedback loop.)

“Why does ‘she’ share this on the week we celebrate the father?” ‘She’ hopes to inspire the father and the male embodiments on planet earth to ponder a few questions…

How do you want your daughter and son to be honored, respected and loved?
Do you embody and model that honor, respect and love for self, your father and mother, in all your relations and in your world expression?
Have you made peace with any abuse, manipulation or trauma passed down from your parents or that you have inflicted on another or your children?

What is your highest reflection and are you ready to transmit and embody it?

‘She’ sends a special thank you to her father for being open to transformation, humility, and modeling love for her & his mother and his children…Watching him metamorphosis has been one of the most beautiful experiences to bare witness too…And has lead her to the conclusion that, ‘Anything is Possible’…Shall we raise the vibration…one ‘self’ at a time,
‘For our children and ‘HU’manity?’

Want to align, create and actualize your vision?…Moving through a Transition? Connect with the DREAM..

Want to reconnect with the Alchemy of Food?
or Explore Dreams {the Astral World}?
Connect with Suzanne one-on-one…visit SuzanneToro.com