Join Suzanne Toro for a 22 minute meditation/visualization. Join her on a journey inward connecting to your Truth and Love. This meditation will be especially helpful for those who truly want to let go and connect to your highest SELF.

Music by Jean-Philippe Rykie and Lama Gruye Song: The Mantra of Padmasambhava

Mantra used in the song: 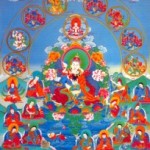 is the mantra of Guru Padmasambhava, you can say this mentally or verbally, it is better to start out loud until your mind is quiet and then say it mentally, the benefits of this mantra are below.

Admasambhava was probably an historical character, but has been elevated to the Bodhisattva pantheon. He has many different forms. In this image he is portaryed as a siddha, but wears a bhikṣu’s robe, a pandit’s hat, and the implements of a siddha. In his right hand he brandishes a vajra held in the warding off evil mudra; while in his left hand he cradles a skull cup filled with Amṛta – the ambrosia of the gods which gives immortality. In the crook of his left elbow is his katvanga or magical staff which, like the Śaivas’, is a flaming trident decorated with severed heads in various stages of decay.

Padmasambhava played a crucial role in establishing Buddhism in Tibet where he is revered as a second Buddha particularly by the Nyingma School. He used his magical powers to subdue the demons of Tibet in order to allow Buddhism to take root there. In Tibet he is referred to as Guru Rimpoche (Precious Teacher), or the Vajra Guru. His mantra is also known as the Vajra Guru mantra.

The Rigpa Shedra Wiki has a good introduction to the life of Padmasambhava. (notes from)